"THE EMERGENCY WILL REPLACE THE CONTEMPORARY " 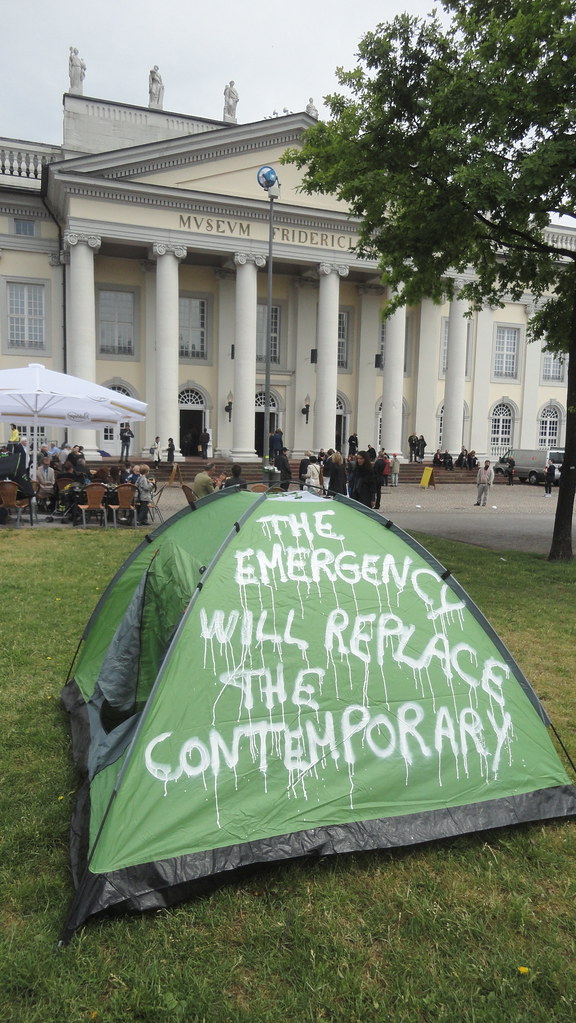 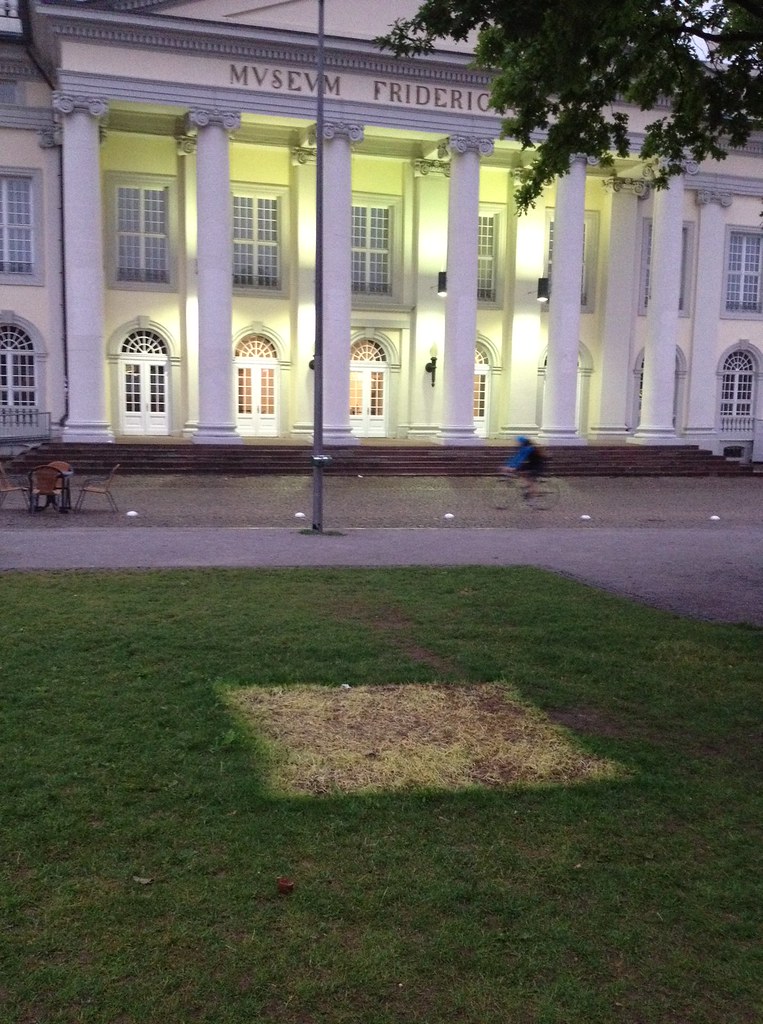 Colonel 's  art works "THE EMERGENCY WILL REPLACE THE CONTEMPORARY "
was  implanted the  first time the 06 th of June 2012
Several days latter  the occupy movement started to plant their tents on the grass facing the Fredericianium in Kassel.

Colonel 's  installation  "THE EMERGENCY WILL REPLACE THE CONTEMPORARY " 3,2 kilos tent
that started the occuppy implantation was removed by the documenta  organizers the 21/6/2012
meanwhile the occupy camp ( after beeing inflitrated by documenta organisers and branded docuppy ) was  declared welcomed .
The occupy camp  then was  inflitrated by police , spies and other employes serving documenta was driven in an evacuation scenario
and left the ground 1 week before the end of d13 "THE EMERGENCY WILL REPLACE THE CONTEMPORARY !
The Magazine KunstHart made the  printed front page on their dOCUMENTA special  issue with the Biennalist art work unfortunatly just after that the tent was removed by dOCUMENTA the tent was confiscated 1 day after publication
An art work  : a painted with spray  tent as Biennalist canvas was installed by Thierry Geoffroy / Colonel
the 06 June 2012 just after the press conference ( where Colonel did a video work as a naive blue Helmet )
The art work was implanted next  under to the Joseph Beuys tree and was the first tent to be planted
Colonel 's  implantation was recorded  by several TV reports and photographed

The 6 th June 2012  the artist  TG  made a mobility test   ( "This is a moving exhibition ")  ,  and the tent broke during the experiment
This  first tent has been purchased for the collection of the Museum of contemporary art - Museet for Samtidskunst in Roskilde with support from the danish art council

The 07 th june a  new  art work : a tent painted on 4 sides  was created and planted at the same location
this one stayed for several weeks and created a debate as well as the start of the occupy movement
"THE EMERGENCY WILL REPLACE THE CONTEMPORARY "
it remained  until the 21 th of June until it got confiscated by the documenta organisers
and brought down in the keller of the Fredericianium where is what found by the  artist Bongore

Those 2 tents before beeing planted were fotographed from different angles .

"THE EMERGENCY WILL REPLACE THE CONTEMPORARY "tent attracted the occupy camp settlement :

"In  fact I  was  not welcomed , and got my tent - art work confiscated
What was wrong with my " occupation " to make it unwanted and confiscated ?"

I had the first implantation in front of the Fredericianium   , since the 6 th of June ( D DAY )
Some of the critics  found my slogans and debate issues relevant enough to publish them , even of their magazine front page .

Why did documenta ( branding itself tolerant and welcoming  )  removed my contribution to the debate on contemporary art and emergencies
as well as the 60 years  old man  , homeless ,  finding a home  in my tent was removed  ?

The 6 th June first move  of Thierry Geoffroy art work  "THE EMERGENCY WILL REPLACE THE CONTEMPORARY" / "D DAY "  version mobile
The 7th Implantation again of the installation "THE EMERGENCY WILL REPLACE THE CONTEMPORARY"
The 9 th of June the  police gave permissions to  the  tent  to camp in front of the Fredericianium
(the  tent when we were checked during the  Bundespräsidenten Joachim Gauck  visit of documenta ). Latter that day the  ) 9 th of June , the occupy movement constructed the beginning of their camp  with only one tent  that day. Fast the occupy  camp  started to grew ....... /  as I came back to Denmark I could follow the expansion thtough video camera The 20 th  of June the belgium art magazine Kunsthart did it' s front page with my art work  (7th) "THE EMERGENCY WILL REPLACE THE CONTEMPORARY "
the 21 th of June  Thierry Geoffroy installation  was removed . The  trace of  disparition was very visible on the grass . The artist  Bongore in Kassel then  noticed it and took photos of that disparition . He also  searched  for the confiscated art work and after investigations found it at the Fredericianium office with the explanation "it should not be there "
Thierry Geoffroy  tent  was removed but the occupy was not removed  on the contrary the movement was announced welcomed after 30 days of occupation
The curator  send a press release where she welcomed the occuppy to stay
branding it " doccupy "and referring to Beuys . (8/07)

Is there any selectif way ( curatorial ) ways  of choosing what is a welcomed protester and one that has to be removed  ( unwanted protester) ?
Was the text " The Emergency will replace the Contemporary  " not proper for the  debate
Why did documenta choose to brand it self through the slogan " Fight Capitalism " presented in it s press release ?
( did they felt with all their sponsoring , weapon industry environement attracted by such slogan ? )
Latter I understood that the tolerated occupy camp have been infiltrated  by police and people from documenta
that was why it got tolerated  even so use for promotion , to give an illusion of inclusion and tolerance

Did the documenta found the slogans on TG tent  offending any one  ?
Is it not true everyone is working with the tourism office ( bringing in tourits to Kassel )(eventually working for free)
By confiscating the tent did they wanted to do a chirurgical exctraction for all   biennalist projects ?
Is it not true the contemporary is too late ?
What is the criterium of selection  for  good protester  - bad protester ?  a tolerate protesteur   a welcome protestor
Can some protesters be better than others or more usefull? Is it a question of slogan or if efficient infiltration  can be done  ? What are the criteria of selection ? Can protesters be curated? Is it ok to use the protesters for communication purpose? Is it a question of aesthetic? Is it a question of negotiations ? Is it a question of infiltration ? It was true that the contemporary was always too late it was true that the Emergency will replace the contemporary I did not say anything that could offend A contemporary art show has  to also work with an ULTRACONTEMPORARY  format to be able to reflect and debate  : "In advance of the broken arm "  ( before the killing  by the tanks happen for example )  ,
not 40 years latter .
Now meanwhile art , artists , institutions can have a real voice an some  impact
Documenta d13 expressed  about nazism ( past  nazism)  , camps , deportations but  crying  on history is not enought to avoid future accidents the art scene has also to confront with actual debates not hide them like the enormous  production of tanks in Kassel only 10 minutes walk from d brain  . Why to organized such a large art show about the world without looking at the world now and in proximimity .
There is not a good art show without debate Passed the frustration to have been erased and removed I now start to see clearly how the contemporary instrumentalise the protest to create this illusion of debate and openness How instrumentalised protest create an opposit effect ( creating more diversion and more apathy ) The occupy became symbol of tolerance ( with help of infiltrations , spies , threat ) meanwhile cleaning was done in the dark . From When is a Tent Not a Tent?   by Dave Loder uploaded on academia edu

But one particular tent escaped any such attention by dOCUMENTA(13). The French artist Thierry Geoffroy, also known as the “Biennalist”, was
in fact the first to erect any type of tent in front of the Fridericianum and
could certainly be defined as antagonistic in nature and directed, while not necessarily specifically at dOCUMENTA(13), emphatically against the institution of globalised contemporary art. The tent itself (a form Geoffroy has been exhibiting since 1995) was spray painted with slogans: “THE EMERGENCY WILL REPLACE THE CONTEMPORARY”; “THE CONTEMPORARY IS ALWAYS TOO LATE”; “I AM NOT WORKING FOR THE TOURIST OFFICE”. Installed by the artist on the 6th June a few metres from where the dOccupy camp was to spring up, the unauthorised tent was subsequently confiscated on the 21st June by persons unknown to be found later in the basement of the Fridericianum.[5] The artist questions the judgement by which the dOccupy tents were favoured over his own; why the exhibition prefers to align themselves with the generic slogan “Fight Capitalism”; why some protestors are more welcome than others; and can protestors be curated?[6]
......
Geoffroy’s tent fulfils the role of a territorialising apparatus with a patterned trajectory. By virtue of sanction, the smoothing of dOccupy was striated, whereas as the ejection of Geoffroy maintained a trajectory. Although the physical tent was evicted, the smooth space remained as a void of dead grass. The tent itself was not the smooth space, but rather was the device which territorialised the space of the (now dead) grass and its mediated image. 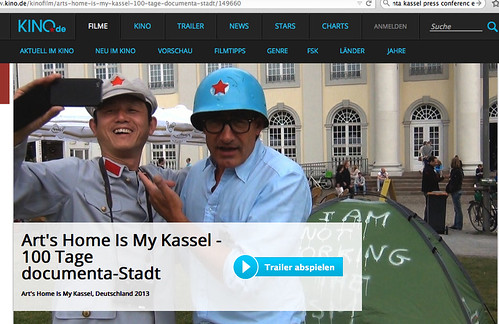 “I AM NOT WORKING FOR THE TOURISM OFFICE”

“ART IN DELAY CAN NOT HAVE IMPACT” Aesthetetic of elimination, repression, death and emptiness - the last days of Documenta ,
what happen to the occupy movement ...( click ) 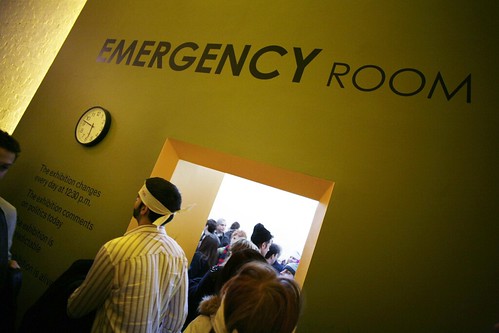 Sebastian Baden ( on the right ) during a critical run in connection with the Biennalist exhibition at the ZKM exhibition museum in sept 2011  ,
the debate topic was "Are Biennales dangerous ? "link to Biennalist  Read here text from Art das Kunstmagazin : Documenta Kassel:  " Is committing self-censure a solution? " 7 blog by Thierry Geoffroy in Kopenhagen.dk

This time Emergency Room is sending the naive blue helmet to Kassel / Is Kassel the wrong place ? , is he send too late .
why Kabul . ? is there any weapon market for the Kassel industry ? or other motivations ? what are the real motivation to do art  in a  war zone ? "THE CONTEMPORARY IS ALWAYS TOO LATE " The naive blue helmet at press conference  : Why all this press in Kassel ?
What is so important to debate ?  see film "I AM NOT WORKING FOR THE TOURISM OFFICE  "

IS NAVIGATION A THREAT ? 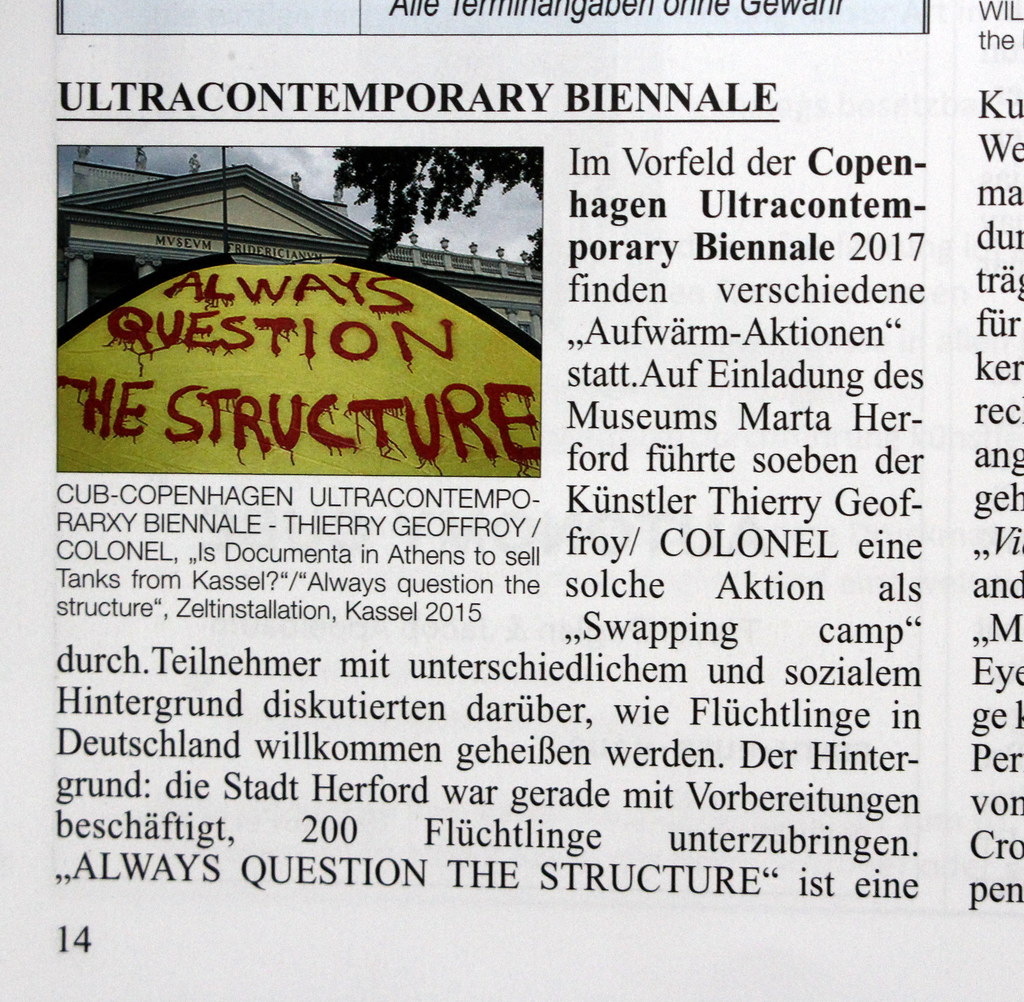 "THE EMERGENCY WILL REPLACE THE CONTEMPORARY "tent attracted the occupy camp in 2012  ....but was remove allready in july 2012 leaving a trace
in 2017 one of d14 most communicate  official art work was  a marble tent
that also run over budget when it had to be transported from Athens to Kassel... 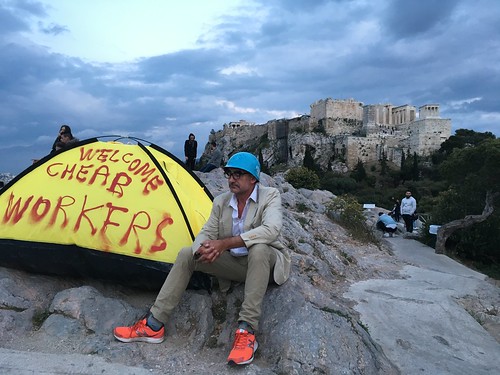 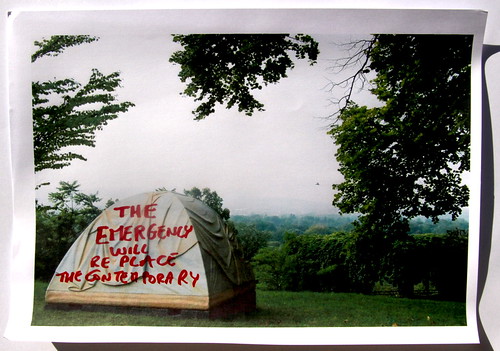 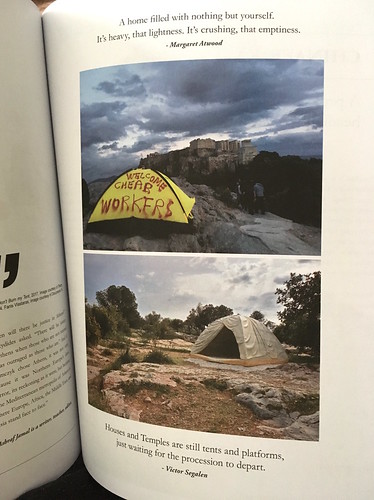 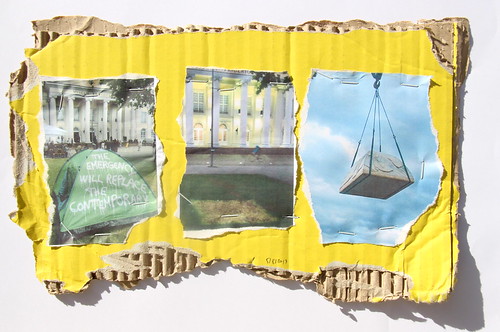